AS SEEN ON SHARK TANK

AS SEEN ON SHARK TANK

Jason Lansing is one-third of The Players Trunk, an online platform where college athletes sell their gameday gear to fans, creating a market that has been left wide open.

“We recognized a void in the sports memorabilia marketplace and wanted to fill it,” said Lansing, 23, a resident of Lincoln Park.

The business, which focuses on college sports fans with autographed collectibles and worn gear, caught the attention of the popular show “Shark Tank,” in which contestants pitch their products and businesses to established businessmen in hopes of having them invest in their idea.

“They actually reached out to us; they saw a promo video that another media company did for us and thought that it would be a unique showing on their show, just because I think we're a little different as the marketplace instead of sort of a product,” Lansing said on how they landed a spot on “Shark Tank.” 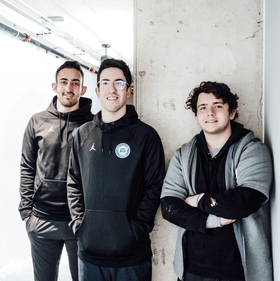 Lansing was attending the University of Michigan when he and roommate Austin Pomerantz came up with the idea of The Players Trunk in 2020, during the early days of the pandemic.

“We were both managers for the Michigan basketball team. And two of our friends who were on the team wanted help selling their old gear, and there wasn't really a way to do it. And that's when we sort of thought of the idea,” said Lansing.

The two friends who asked for their help were Charles Matthews, who now plays for the Maine Celtics of the NBA G League, and Zavier Simpson, a guard for the Oklahoma CIty Thunder. Matthews and Simpson are both partners of The Players Trunk.

After Lansing and Pomerantz were sent home because of the pandemic they didn’t sit idle, Pomerantz’s brother, Hunter, who attended Syracuse University, also joined their team. The three went full speed into their business seeing that the market was huge from multiple angles.

“You can sell items that you can't buy in the bookstore, right? So it could be a warmup jacket that you literally can't find anywhere else than directly from an athlete, and to be able to wear that to a game and have everyone ask you where you got it. It's pretty cool,” Lansing said.

Lansing said startup costs were relatively low, with the three of them putting in a couple thousand dollars each, having to register for their LLC and purchasing a yearly plan.

The announcement by the NCAA in June of last year that allows college athletes to make money off of their name, image and likeness impacted the expansion of The Players Trunk.

Lansing says that although a big chunk of their business is selling merchandise of former college athletes, the new rules allowed them to get into different verticals such as trading cards and customized merchandise for current players, since current student athletes aren’t allowed to sell their gear.

Lansing said for current student athletes, The Players Trunk takes anywhere from 25% to 40% of the profit. For trading cards, the college athlete is usually paid upfront to sign the cards. For former athletes, the company takes 20%, helping them sell their gear while dealing with the shipping and handling, and the former athlete receives 80% of the profit.

The Players Trunk will appear on the season finale of “Shark Tank” on May 20.